When Colin W. realised that the Government's requirement under the General Binding Rules for Small Sewage Discharges that, by the beginning of 2020, all septic tanks in England that discharge directly to a water course must either

was going to affect him and his neighbours, he contacted specialist off-mains/on-site sewage treatment system designers and package sewage treatment plant installers Hutchinson Environmental Solutions. Colin had already made up his mind that he wanted a Biorock package sewage treatment plant because it required no power. Hutchinson had designed and installed a Biorock system for another neighbour some years ago - which continues to treat their wastewater effectively without incurring any electricity charges - so Colin went no further than Hutchinson for advice and a firm "This-is-the-price-you'll-pay" quote rather than an "Oh-sorry-we-forgot-to-include-for..." estimate.

There's a septic tank in here:

After half an hour with a machine and Andy's 40-odd years' experience: 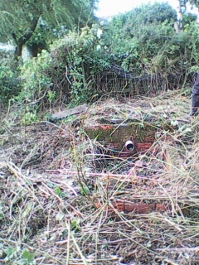 It has to be said that Biorock sewage treatment plants do not lend themselves cost-effectively to all sites. The trickling filter treatment process means that wastewater has to percolate slowly downwards, by gravity, through the filter material packed into the treatment tank, so it enters at the top at one end of the tank and exits some 1.4m deeper into the ground at the other end of the tank. Since the inlet depth of the pipework to that tank might well be 0.5m, the outlet pipe would therefore be 1.9m below the ground surface. 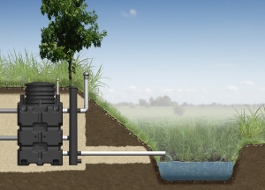 Such a depth requires either a deep trench cut in a "V" shape to allow safe working conditions for our team of groundworkers to install that pipe - if you were to try standing in a narrow trench that's as deep as you are tall you'd realise that its not a pleasant feeling - or ground that slopes away from the outlet point of the treatment plant. It's easy enough to dig a wide trench with a machine, but a "V" trench is almost as wide at the top as it is deep, and the spoil has to be stored somewhere before it can backfill the excavation. This means that enough land must be available in which to dig, operate machinery and store the spoil until it goes back in the hole. Realistically you're looking at a strip 4m wide at the very least.

Or you can fit a pumped outlet, like this: 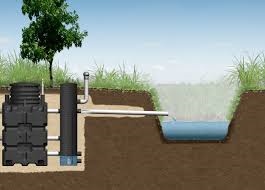 But doesn't that rather defeat the object of having a plant that doesn't require power - not because a pump uses a lot of electricity, it doesn't -but because ofthe cost of laying apower cable to the plant in the first place and then having to "maintain" the pump when it fails, as all pumps on all plants do in this market segment.

The trickling filter tank also requires a continuous flow of air to be drawn through it, to make oxygen available to the aerobic bacteria that break down the organic compounds in the wastewater into simpler chemical elements. In a conventional treatment plant this is achieved by using an electric air compressor to drive oxygen into the wastewater, 24 hours per day, 365 days per year: it is here that the Biorock justifies its existence, both by saving that daily expense and the annual expense of replacing air filters, diaphragms and eventually blowers themselves when they fail. And, of course, by not making even the slightest noise.

Colin's site satisfied all of the above requirements, there being ample land available sloping towards a watercourse. It also benefits from the constant breeze coming off the Irish Sea, westwards towards the fells of north Cumbria and Cockermouth.

Hutchinson were able to demonstrate that the installation of the Biorock met all the conditions of the Environment Agencys General Binding Rules for Small Sewage Discharges so no environmental permit was required. Colin managed his own planning and building regulations approval after advice from Hutchinson.

"Hutchinson enjoy a good reputation in Cumbria as competent, independent, value-for-money wastewater treatment system designers, installers and maintenance providers. Not that my Biorock needs much maintenance, just an annual inspection and desludging according to how many people are in the properties it serves, about which Hutchinson's Carlisle-based engineer advises us. And I wasnt disappointed. The work was discussed and well-planned in advance, the plant size was justified in writing according to industry standards and the installation including demolition of the existing septic tank went without a hitch" said Colin.

A neat excavation doesn't perhaps look much on its own to the untrained eye, but accurate work greatly reduces the volume of backfill concrete, which keeps costs down. Spoil was disposed of on site, but if it has to be lead off site for disposal good groundwork reduces those costs too. 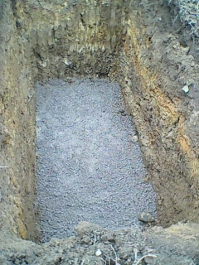 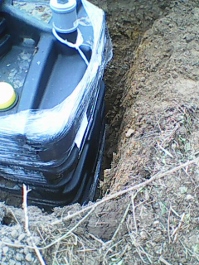 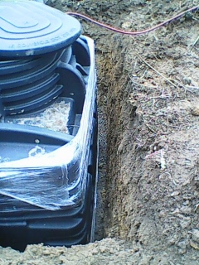 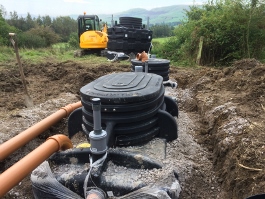 If you'd like us to look at your site to assess its suitability for a Biorock package sewage treatment plant, to discuss alternatives if not, to check whether or not a septic tank and drainage field soakaway would meet the requirements of the Environment Agency's General Binding Rules, then please do give us a call or drop us a line.